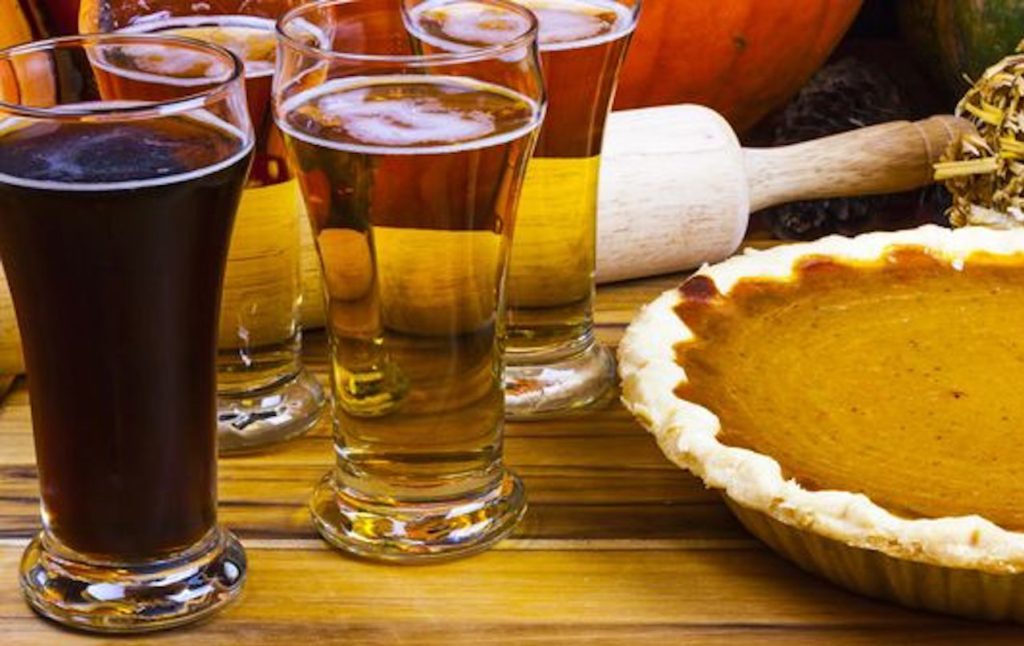 Thanksgiving, our national day of feast, offers an opportunity to enjoy an amazing amount of food, but let’s not forget the beautifully brewed beers that also make this nation great.

The following five beers, based on data derived from iPourIt systems across the country, will help carry you effortlessly from hors d’oeuvres to dessert next year, pairing perfectly with each buttered phase of your Thanksgiving day meal.

Start your Thanksgiving day with this fall seasonal from the Bruery of Placentia, California. Autumn Maple is, in fact, autumn in a bottle: 15 pounds of yams, along with cinnamon, nutmeg, allspice, vanilla, molasses and maple syrup go into every barrel, making it a fall favorite among beer nerds reaching for an alternative for pumpkin beer this year. The wort (that’s the beer before it’s alcohol) is fermented with the Bruery’s traditional Belgian yeast strain, which makes the cool-weather concoction a bold, spicy, slightly sweet sipper perfect for pairing with turkey and sides of all kinds.

Note: There are also bourbon barrel aged, brettanomyces and soured versions of Autumn Maple. Look out for all four!

Whether you’re into fresh cranberry sauce or cran from a can—or even neither—you’ll want to reach for this fruited sour ale from New Glarus, which describes the beer as “a kaleidoscope of Wisconsin fruit”: cranberries, apples and cherries mix together and age on oak barrels, where they’re fermented with wild yeast, to Thanksgiving-pairing perfection. This ruby-red brew is sweet, sour, delightfully effervescent, and well-accompanied by fruit, pork, funky cheeses and vanilla-based desserts.

Okay, so this one’s not really American—in fact, it’s a Copenhagen-based company’s creation, brewed at a brewery in Belgium—but it embodies the American spirit, which is wild, sweet and bitter all at once, and has a history that’s a little bit hazy. SpontanCarrot is the latest in Mikkeller’s lambic-style “Spontan” series (which has included SpontanFig, SpontanCherry and SpontanFramboos—that’s raspberry), and if you’re Thanksgiving is anything like ours, it’s a much more interesting root vegetable option than those soggy baby carrots you’ll probably be pushing to the side of your plate.

This collaboration between Two Roads Brewing of Stratford, Connecticut and Evil Twin of Brooklyn, New York (the latter of which, incidentally, is owned by Jeppe Borg Bjergsø, the twin brother of Mikkeller owner, Mikkel Borg Bjergsø), is the liquid version of what we wish our last Thanksgiving side was instead of green beans: An amalgam of sweet potatoes, purple mais and Aji Panca chili peppers, three Peruvian staple foods that pay homage to Incan culture. The beer’s name is that of a goddess known in Incan mythology as the earth mother. Appropriately, the porter balances sweetness and heat, and is rich in body and flavor, much like, we imagine, Pachamama herself.

After eating and drinking all day, this coffee stout will serve as a helpful lift between your food coma and losing the fight for the couch. Brewed by Modern Times, which runs both beer- and coffee-making operations in San Diego, Black House is a full-bodied, roasty, chocolatey oatmeal stout, with an eye-opening coffee aroma that promises to keep you awake as Thanksgiving day wanes. Just try not to reach for that second—okay, third—slice of pie before you drink it.