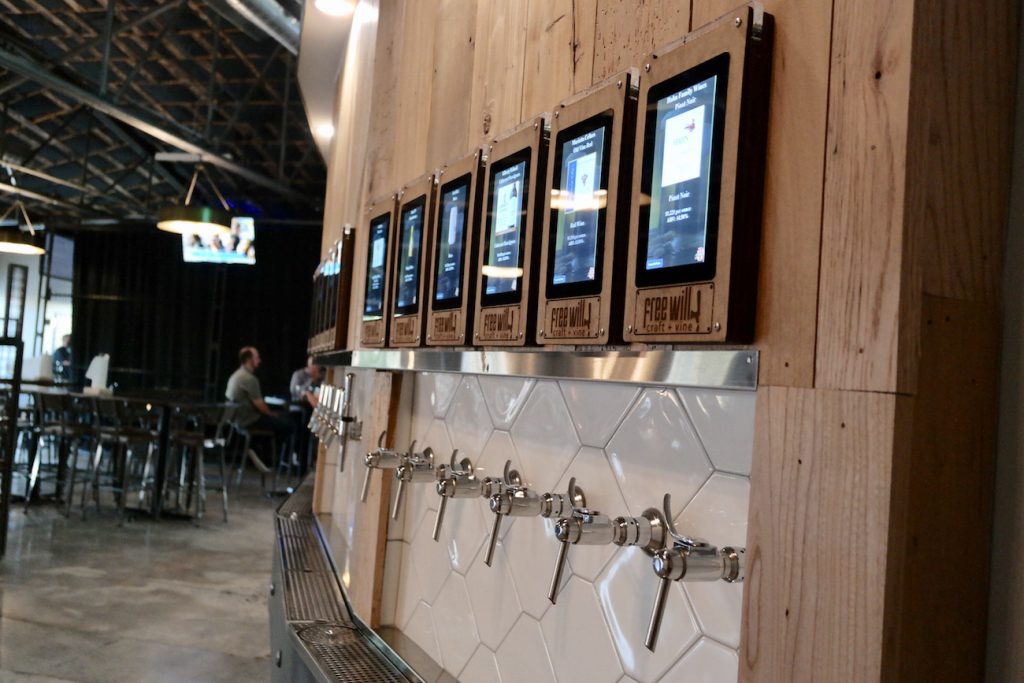 Free Will Craft + Vine, a new 60-tap self-serve beer and wine bar similar to Hoppin and Pour Taproom, is now open in NoDa.

Free Will Craft + Vine, a new 60-tap self-serve beer and wine bar similar to Hoppin and Pour Taproom, is now open in NoDa.

Nephew and uncle duo Joel Cox and Jon Cox opened the bar quietly this month and will host the bar’s grand opening this Saturday.

The first time Joel Cox had been to a self-serve bar was about 10 years ago in Chicago. He decided to start his own version of one because of his love breweries and beer and dislike for long lines. According to Cox, when he would visit different breweries, he always wanted to try a variety of beer before committing to a full pint. However, with busy crowds, his freedom to do so felt very limited. “Once I had someone’s attention, I would just randomly pick a beer.”

The name “Free Will” stems from the concept of having a choice, and multiple ones at that. In addition to beer, the bar will also serve white and red wine, Prosecco, rose, cider and a seltzer. Cox said they hope to also have a local kombucha on tap in the near future.

“We really wanted to come up with something that was synonymous with having a choice, Cox said. “We have 60 taps open to choose from, a loungey chill side for relaxing, live music, an active sports-bar side, a massive sports simulator, and a large patio.”

The beer wall will be made up of about 50 percent local beers and 50 percent other selections, including some unconventional options.

“The whole point behind this concept is to try stuff that you wouldn’t want to buy a $20 six-pack of without tasting first,” Cox said. “We want people to be able to try the off-the-wall stuff, so we are going to go after those hard-to-find kegs but will still have some names people recognize.”

If lighter beers are your jam, grab a glass and start your beverage pursuit on the left side of the beer wall. More into stouts and porters? Work your way over to the right side of the wall. Taps are organized by color to simplify decision making. Ciders, seltzers, and wine can also be found at the right end of the wall next to the water spigot. If you are confused on what to order, Free Will will have “roaming beertenders” to assist in your decision making.

“We wanted to break the chains off the bartenders and allow them to roam free to help customers make a decision,” Cox said.

There will also be a smaller corner market on the left side of the brewery with a second checkout station for stand-alone beverages. Although the bar will not serve food, there will be food trucks positioned outside for quick bites in between refills.

The taps will rotate continuously depending on what customers are looking for and what’s in season. Free Will’s operations manager organized the initial beverage list. The Free Will team asked around for different recommendations from friends, family, and vendors for what type of beer they wanted to see on tap. As the name suggests, Free Will wants to encourage customers to recommend beers that they would also like to see on tap.

“The name is more than just a gimmicky name. We really have the free will to do what we want, and we want people to be vocal about what they want to see,” Cox said.

Located at 3701 N. Davidson St., Free Will will share the same building with Divine Barrel and will be adjacent to Bold Missy Brewery. The brick building has worn many hats over the years, one of which is the practice court for Charlotte Roller Girls, a women’s roller derby league. Since the bar has taken over, the building has become a piece of the puzzle for the development of NoDa.

“We looked at this building early on. I love brick and the industrial feel, so I was pushing pretty hard for it,” Cox said. “We had come here for an event that Divine Barrel was putting on a while back, and they had pulled together a pretty big crowd; I think that was the deciding factor. We knew NoDa would be moving this way.”

Free Will’s grand opening this Saturday will feature live music, football games on the TV screens and lots of beer. Keep up with updates, giveaways, and deals by following @freewillcv on Instagram.