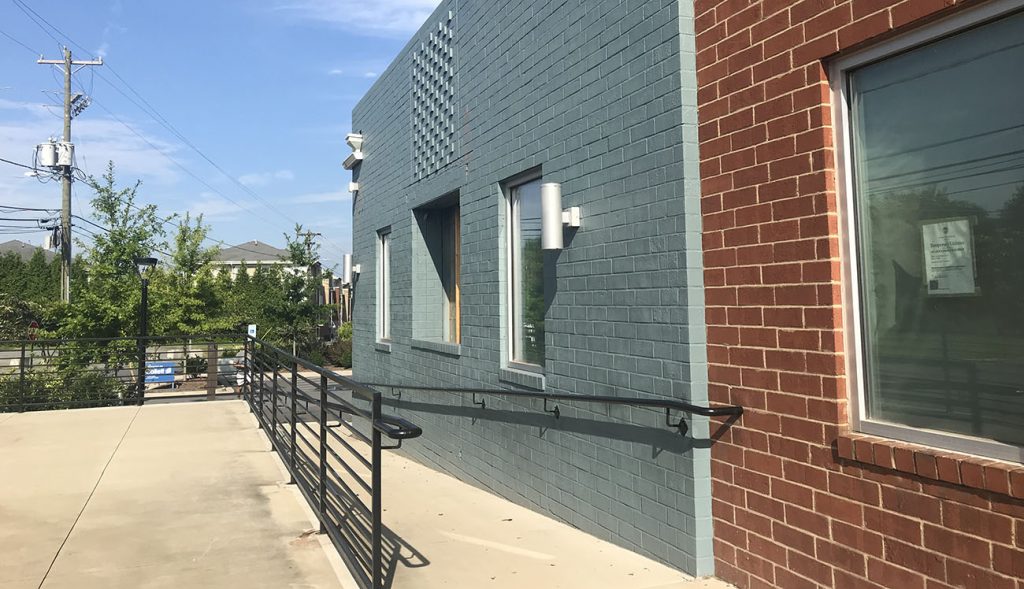 The family behind Big Air Trampoline Park is opening a self-pour beer and wine bar/lounge called Free Will Craft & Vinenext month in NoDa next to Divine Barrel.

Owners Joel Cox and his uncle, Jon Cox, quietly began construction on the 4,500-square-foot space a few months ago. Free Will will have 60 taps, 40-50 of which will be dedicated to local and national craft beer, Joel Cox tells the Agenda. The other non-beer taps will have wine, Prosecco and non-alcoholic options like kombucha.

Cox describes Free Will as an “active lounge,” or a mix between a sports bar and a lounge. It’ll have a little something for everyone, Cox says — plush sofas for lounging, a corner stage for bands and trivia, a 14-foot multi-sport virtual simulator and half a dozen flat-screen TVs for game-watching.

Free Will’s name was inspired by the range of activities and drink options it’ll have, Cox says. “It’s synonymous with choices. Lots of choices.”

The space: Before the squat brick building at 3701 N. Davidson St. was home to Divine Barrel and Free Will, it was the practice court for Charlotte Roller Girls, the women’s roller derby league that was renamed Charlotte Roller Derby last year. You can still notice the team’s old purple track on the floor of Free Will’s back room.

The Free Will space is in the midst of a major upfit that Cox says will give it an “industrial chic” vibe. Its long self-serve tap wall, for instance, is made of reclaimed wood from Cope and Stick, the local vintage lumber supplier behind projects like the wooden exterior of Leroy Fox in Cotswold. This week local artist Darion Fleming is adding a giant white bird mural to the bar’s freshly painted teal exterior.

Free Will won’t have a kitchen, but it’ll have the plumbing and wiring required for one in case Cox and his uncle decide to open one eventually, he says. The bar’s patio is 1,500 square feet and will have outdoor seating as well as games like corn hole.

The sports: Perhaps the most prominent sports feature in the bar will be its 14-foot virtual multi-sport simulator on its back wall. It’s basically like a big TV screen that lets you play sports like golf, hockey and football virtually like you would with a Wii. It can also be turned into a TV if there’s a big game on, Cox says.

“We’re not going to advertise that we’re a sports bar because we’re not. But when big games are on and people want to watch them, we’ll put them on.”

The booze: Customers will be able to buy wristbands at the entrance of Free Will when they walk in, just like Pour, Hoppin’ and other self-serve taprooms. The bar will have a rotating selection of local and national craft beer, along with non-beer drinks like wine.

Self-serve taprooms have been popping up all over Charlotte in recent years, from Pour Taproomin Plaza Midwood to Hoppin’ in South End.

“We really like the concept of not having to wait in line,” Cox says. “No matter how busy you are, you’re not going to have 60 people trying to get a beer at once.”

Cox, who opened the popular Big Air Trampoline Park with his uncle two years ago, is aiming for a mid-September opening.