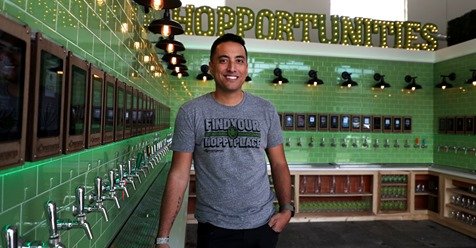 There are no long-mustachioed hipsters tending bar at Hopportunities, a 3,000-square-foot tavern about five blocks north of Delray Beach’s Atlantic Avenue. Instead, there are “beer-tenders,” stationed near the bar’s 55 tap handles, who coach customers about the art of pouring the perfect pint.

The man responsible for making your IPAs DIY is owner John Macatangay, inspired to open Hopportunities after spotting multiple self-serve beer halls during his travels in California.

“I have no business opening up a craft-beer bar,” says Macatangay, 39, by day an insurance agent in Delray Beach. “But I just fell in love with the idea of a place that lets people try as much beer as they want without having to commit to a full drink.”

The bar at 440 NE Fifth Ave. (and northeast of Pineapple Grove) soft-opened with limited hours last week, Macatangay says, while Hopportunities secures its patio-seating permits. It resembles a self-serve frozen-yogurt shop like Menchies or, to use an alcohol analogy, Delray Beach’s nearby Wine Room, which includes 200 self-serve wine dispensers.

To order, customers start a tab by handing their driver’s license and payment card to the cashier, who issues a microchipped wristband. Drinkers then take their empty pints to the taps, where a touchscreen LED screen displays the beer’s price, name, style, alcohol-by-volume and the brewery’s Instagram handle. Scanning your wristband against the screen “unlocks” that beer’s tap handle, Macatangay says.

He says the bar’s J-shaped rear wall, decorated with a lime-green-tiled backsplash, will showcase rotating beers from 20 Florida breweries (25 cents to 91 cents per ounce), including Odd Breed and Barrel of Monks, Gulfstream and Tarpon River, Yeasty Brews and 3 Sons. There will also be eight red and white wines ($7-$8 per glass); coffee from Jupiter’s Pumphouse Coffee Roasters; kombucha from Boynton Beach’s Nonprophet Brewing Company; two cider taps; and an orange-juice tap for mixing mimosas and beer-mosas.

Bringing growlers and crowlers – take-home beer containers – is verboten for now, Macatangay says. Drinkers will automatically be cut off after 32 ounces, and the decision to extend your tab is up to the beer-tenders. (“I like to think that people will see the amount of alcohol they consumed and make a judgment call, but they don’t,” he says.)

Customers can also shamelessly blend together as many beers and wines as they want.

“I’m a firm believer in ‘to each his own,’” he says. “Last week I combined a 3 Sons Nitro Pumpkin with Left Hand’s Chai Nitro Stout, and it was amazing. If Starbucks made a beer, it would taste like that. I never thought I’d like it that much.”

The 116-seat taproom features communal benches and lime-green chairs around zebra-striped tables, and weekly events will include music bingo and karaoke, yoga and cornhole leagues. Although most taps will be chrome, Happy Hour beers will be dispensed from gold-plated handles (usually 25 cents an ounce). Twenty percent of proceeds from a green-colored tap will benefit the bar’s charity.