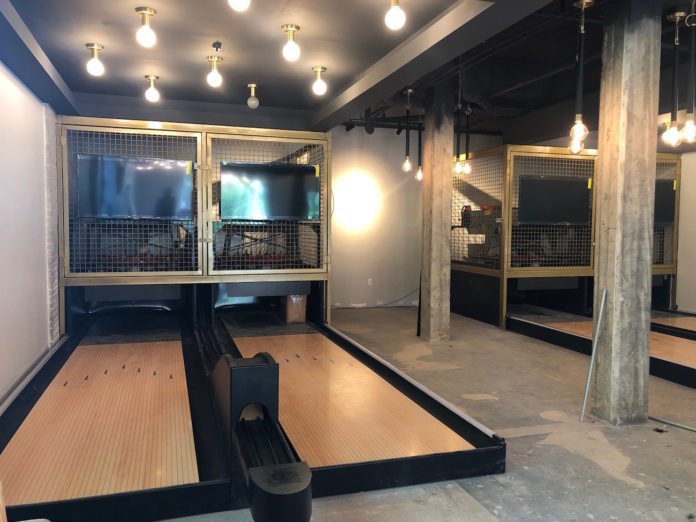 The smell of tar is still fresh as a parking lot takes shape at the newly developed Pinhousein Plaza Midwood. Located at 2306 Central Ave., the owners of South End’s Hoppin’, Rich Moyer and Drew Nessemeier, have high hopes for their self-pour beer and bowling concept.

Pinhouse, which will have a soft opening later this month and a grand opening July 27, will consist of two floors, 72 self-pouring taps and a balcony overlooking Veterans Park. The decor will offer the feeling that you’ve stepped outside the city and into some Gastby-esque reality.

The 1920s and 1930s vibe is exactly what Vignette Interior Design was going for. In addition to Pinhouse, they are also the brains behind Hoppin’s design — yet the two concepts are worlds apart.

“We have the same owners, but the two are completely different business. They’ve each been designed to fit their particular neighborhoods,” said the group’s PR representative, Scotty Kent.

Pinhouse’s dark, warm colors and golden accents offer a direct contrast to Hoppin’s bright white color palette. Pinhouse gives off a high-end vibe that was designed specifically to compliment Plaza Midwood, starting off with a mural by Jen Hill right as you walk through the doors.

Kent, a Charlotte native, said his school bus drove through Plaza Midwood as a child, and he remembers the area pre-commercial development. Once Thomas Street Tavern opened a couple of decades ago, he said it set into motion a movement that led to what we know as Plaza Midwood today. His ties to the neighborhood inspire him to help keep Plaza Midwood’s character and history.

“Plaza Midwood has done a great job at ‘building upon’ instead of eliminating historic structures,” Kent said. Pinhouse will be located in the former Midwood Cleaners building. “We want to compliment what’s here, adding something new to the neighborhood without changing the vibe.”

This is not a typical bar, where guests crowd the area, jockeying for position to gain a bartender’s attention. Instead, staff members serve as guides, helping those new to the concept of self-pouring and answering any beer-specific questions.

Patrons will get a wristband upon entering, which will be scanned when beer is poured. With a smart screen above the taps and the help of iPourit technology, guests choose the amount of beer they’d like, paying per ounce.

Staff members check in with guests after 36 ounces to ensure safety, much like bartenders touted with the task of monitoring over-poured guests.

“With this concept, you’re your own bartender,” Kent said. “Because there is no human interaction involved in pouring your beer, you’re able to create your own experience and focus more on the people around you — as opposed to waiting for servers.”

Beers will not be grouped by style. “This way, people will be more likely to try new things, instead of going right to their comfort zone,” Kent said.

With over 6,000 square feet, Pinhouse will have space for live musical acts on a wood-paneled stage, two outdoor seating areas and four duckpin bowling lanes downstairs. These bowling lanes are shorter than typical lanes (25 feet vs. 60 feet) with lighter balls (3.5 pounds vs. 6-16 pounds).

Duckpin bowling originated in Baltimore at the turn of the 20th century, named after an early player who allegedly said that when hitting the pins, they looked like a flock of flying ducks, Kent said. “There are tons of drinking experiences in Charlotte, but this allows us to do something unique.”

The restaurant group has worked deliberately to draw in local businesses, artists and community members. Hoppin’ plans to host a silent auction June 13 for a family friend whose 4-year-old has been diagnosed with cancer. Local businesses, including breweries whose beer will be on tap at Pinhouse, have donated to the auction.

There will be televisions throughout, and certainly some Panthers and Hornets watch parties (Kent and his brother were the brains behind Bring Back the Buzz), Kent said this is not a sports bar. The big question, then, is whether or not they’ll screen “The Big Lebowski.”

“But that one’s yet to be determined,” Kent said.