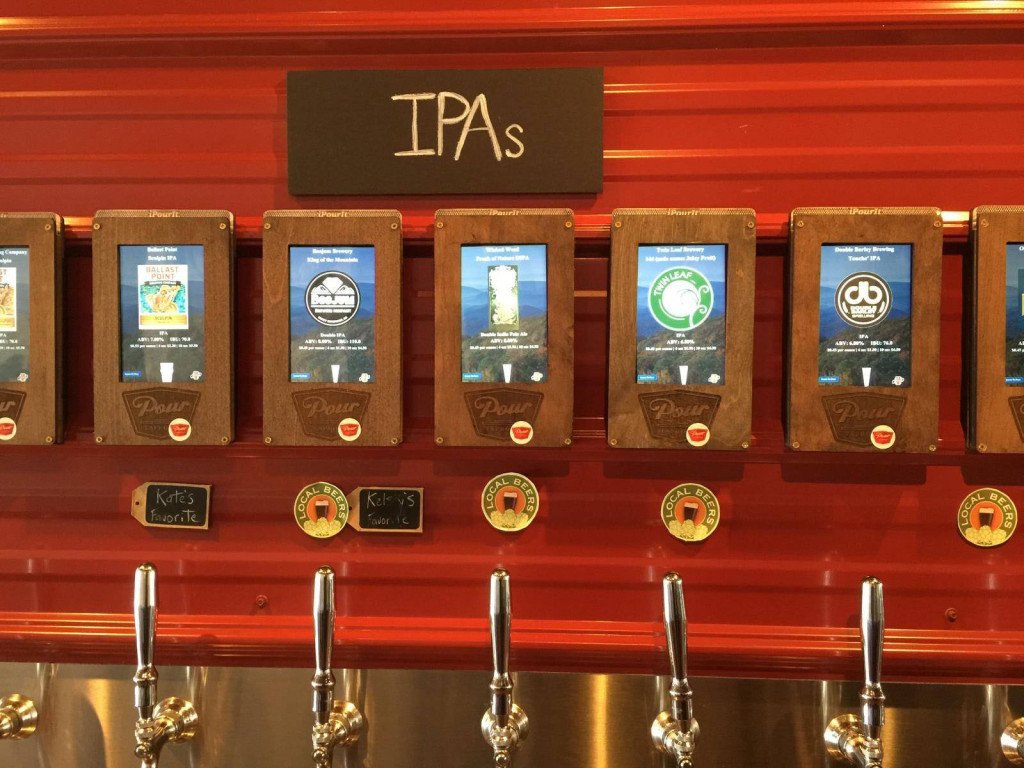 The West End is poised for a new concept in how craft beer is consumed — and with plans for the “pour-your-own” taproom would come a face lift for a prime World War II-era building near the gateway to Falls Park. The new venture, Pour Taproom, would set up shop in the former location of the Miniature World of Trains and Falls Park Golf & Games, next to Gringo’s restaurant on Falls Park Drive.

Downtown would mark the second location for what owner Nate Tomforde says is a craft beer taproom driven by technological innovation that allows craft beer enthusiasts to pay by the ounce.

“We can really provide a unique opportunity to drink craft beer,” says Tomforde, who opened his first Pour Taproom in West Asheville in 2014. “It’s such a fun social environment, like a beer festival.”

The concept would be based on the West Asheville model.

Patrons can sample multiple beers in as small a quantity as they want — whether it’s a 2-ounce pour or a full pint — at their own pace and without the need to flag down a bartender to pour samples, Tomforde says.

The pours are dispensed through a digital tap that reads a customer’s bracelet equipped with RFID tracking — similar technology that’s used in tagging merchandise, timing marathons or chipping pets for identification.

The bracelet interacts with a flow meter to measure to the tenth of an ounce how much beer is being poured.

The bartenders in this case are hosts who scan a customer’s credit card to open a tab and apply a bracelet.

Once customers reach a certain limit, Tomforde says, they must check back in with a host to have their bracelet approved for another round of pours determined by allowable limits within South Carolina beverage law.

The taproom is staffed at the same level as a bar, he says, and hosts, who aren’t tipped, act as knowledgeable beer guides trained just as bartenders are in determining whether a customer has been over-served.

“It’s not a free-for-all,” Tomforde says. “The system doesn’t care how good-looking you are or how much money you have. It cuts you off.”

The venture requires a series of government approvals.

In addition to receiving an alcohol license, the city’s regulations that govern the design of buildings in the downtown district apply to planned renovations to the building at 7 Falls Park Drive (formerly West Camperdown Way).

Renderings filed with the city by Greenville-based LMG Architects show numerous improvements to the 5,000-square-foot brick building, which, according to property records, dates back to at least 1947.

Over time, a number of the building’s windows have been bricked in, as well as a large, garage door-shaped opening in the front. The plans include removing the brick from the windows and the large front opening and installing new awnings.

The plans must be approved by the city’s Design Review Board, which is scheduled to consider the application on Jan. 8.

The space is ideal for a number of reasons, Tomforde says.

With the success of the West Asheville location, Tom Forde says he wanted to bring the concept to a downtown environment and to Greenville in particular, where his wife grew up and his brother-in-law will serve as general manager.

The self-pour technology has been used by bars looking to relieve pressure on bartenders, typically offering six taps of basic-level beers, Tom Forde says. However, he says he saw the opportunity to expand the technology into a new business model that allows customers to try, for instance, a small sample of a beer that might push $20 per bottle.

The Pour Taproom would have 70 taps. Fifteen of them would be devoted to “non-beer items,” such as ciders and wines and alternate beer options like gluten-free.

The West Asheville location features a rotating series of beers that offer “unique and diverse” craft brews from local and regional brewers, all served through well-maintained draft lines and appropriate glassware, he says.

Tom Forde says he has developed relationships with respected breweries in North Carolina — Highland, High Wire, Catawba, to name a few — and intends to work closely with brewers in the Upstate and across South Carolina that he currently has limited access to because of cross-state alcohol distribution laws.

The West Asheville location rotates beers from Greenville’s Quest Brewing and Thomas Creek and Spartanburg’s R.J. Rockers,  but will be able to add others like Brewery 85 and a number of other new breweries coming online in Greenville in the coming months, he says.

“We’re a local business,” he says. “We’ll be buying much more of their beer and supporting them.”

The taproom itself will inhabit an expansive, industrial-like space with the tap system in the open, offering an opportunity for patrons to interact. The taproom will have a game room and numerous televisions throughout.

Pour won’t prepare food in-house and instead will partner with Gringo’s to deliver food ordered through the taproom, much like the partnership between the West Asheville location and Asheville Sandwich Co.

The taproom will offer fillings for carryout beer similar to a growler, except the beer is filled by a canning system into a 32-ounce, sealable can — a “Crowler” — a concept pioneered by Oskar Blues in Brevard, Tom Forde says.

If the approval process is smooth, Tom Forde says he would hope to be open sometime in the coming spring.

The Pour Taproom features a canning system that allows customers to take craft beer to go in a large, sealable can, similar to a growler.