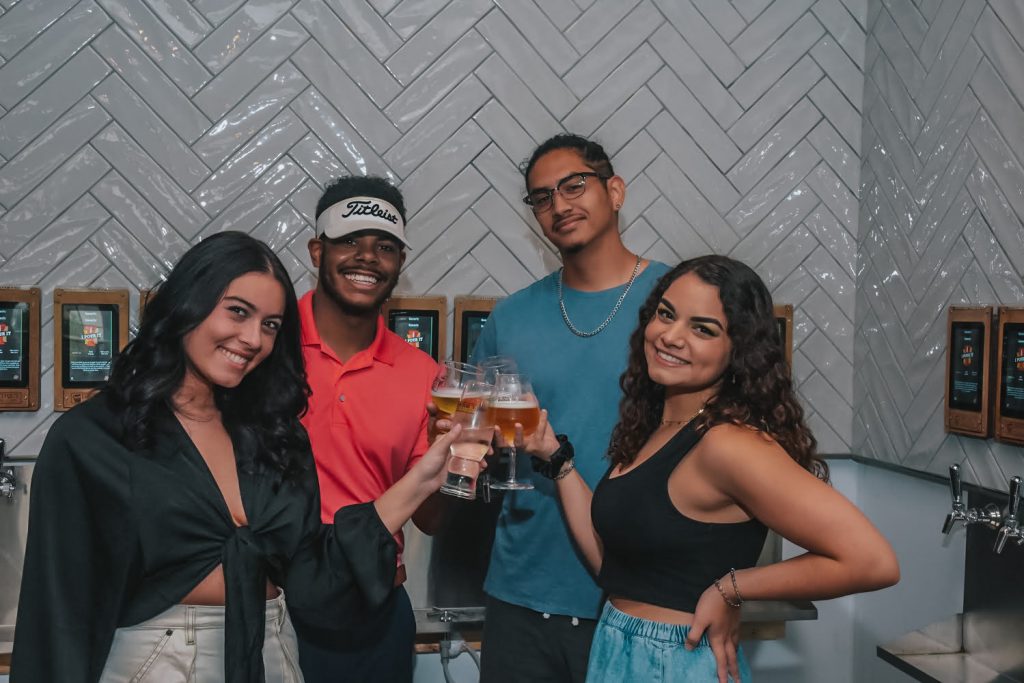 District House of Taps, a new self-pour taproom and restaurant, is now open. The taproom is located inside the historic Hilltop House, a 112-year-old-home in Fayetteville, NC, and features a self-serve beverage wall powered by iPourIt technology. With 40 RFID-activated taps, the self-pour system is the first and only of its kind in the area.

Along with a large list of premium North Carolina craft beers, sours, ciders and wines (with a special focus on Hazy IPAs), a selection of tasty pub food will be served. The star of the menu, “The Steel Town Sammy,” is a loaded Italian sandwich with meat, cheese, coleslaw and fries, influenced by Pittsburgh’s famous Primanti Brothers sandwich.

Planning for their first taproom venture, owners Eydie and Paul Hammaker set out to bring a unique craft beer concept to their hometown. The couple discovered self-pour technology when they visited iPourIt operators Hoppin’ and Pinhouse in Charlotte, NC and knew that they found the right solution.

“We’re amazed by all of the craft beer that comes out of this state,” said Eydie Hammaker. “We want to share that excitement with our community and offer customers a fun way to taste and explore.”

With self-serve technology, customers can pour on their own and serve as little or as much as they please, sampling various styles without having to purchase an entire pint. Self-pour offers a fun alternative to the traditional taproom experience and in addition, it reduces wait time and touch points with staff.

District House of Taps is one of over 60 locations operating iPourIt’s new GEN 4 technology. Darren Nicholson, VP of Sales and Marketing at iPourIt shared, “It’s exciting to continue to roll out the GEN 4 platform in new taproom locations. We love seeing patrons and operators enjoying the new features.”

Located at 1240 Fort Bragg Rd, Fayetteville, NC 28303, District House of Taps will initially be open Monday through Thursday from 4-10pm, Friday and Saturday from 11-12pm and Sunday 12-10pm.  After football season ends, regular business hours will be Monday through Sunday 12-8pm.

About District House of Taps
District House of Taps is the first and only self-pour taproom in Fayetteville, NC.  Opened in September of 2020, the new taproom and restaurant offers 40 self-serve taps with a premium selection of local craft beers, sours, ciders and wines, as well as a full food menu.  Follow @districthouseoftaps for updates.