Coming soon to downtown Winter Haven: A bar without bartenders 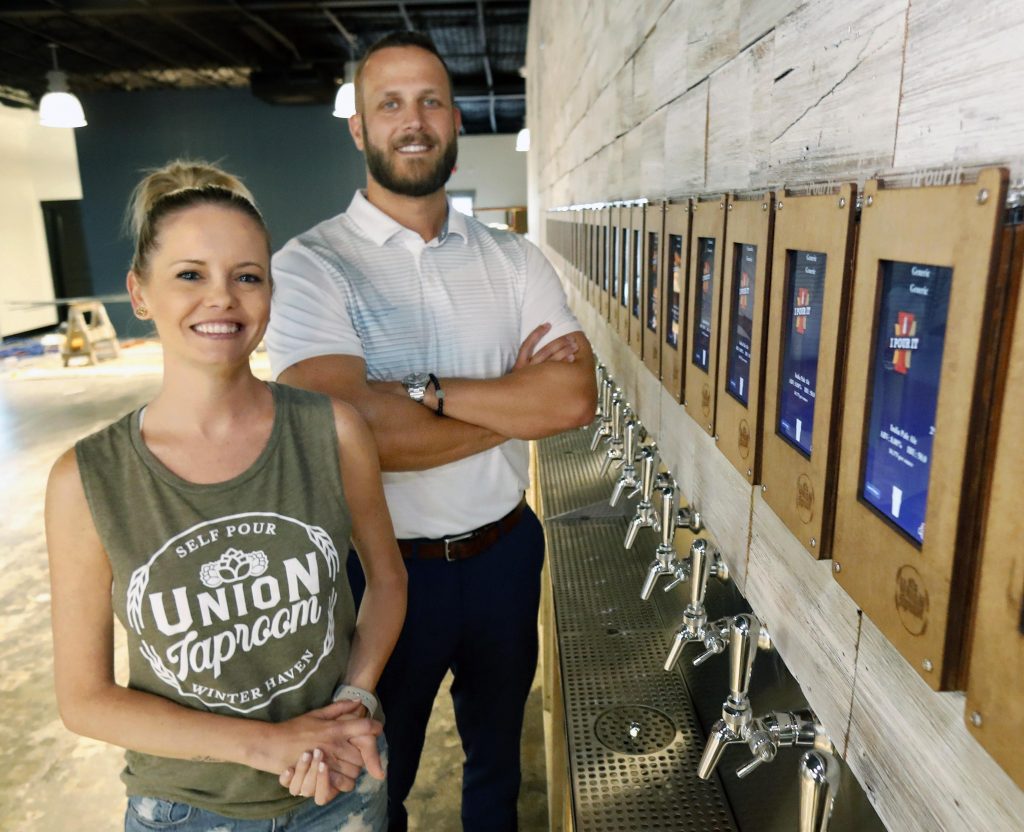 Union Taproom follows a trend in beer halls with self-serve taps, allowing patrons to fill a pint or dispense a small, sample shot.

WINTER HAVEN — Coming soon to downtown Winter Haven — a taproom that lets you go straight to the source without waiting to catch the beer-tender’s eye.

Union Taproom follows a trend in beer halls with self-serve taps, allowing patrons to fill a pint or dispense a small, sample shot. Either way, you pay by the ounce using a radio-frequency identification wristband that automatically tallies your bill.

Located on West Central Avenue just east of The Ritz Theatre, Union Taproom is housed in a former Social Security Administration building that has undergone a dramatic makeover by owner Six/Ten LLC.

Colin and Meagan Wells are leasing the space in hopes of creating a gathering spot for people interested in exploring a vast range of beer styles, with side ventures into hard ciders, wine, kombucha and cold-brewed coffee.

“We’ve seen a couple of these (taprooms) around (the country) and we fell in love with the concept,” said Colin Wells, 34, a resident of Winter Haven who works in the telecommunications industry.

The couple is transforming the lofty space with plenty of butcher block tables, metal chairs and cozy, leather sofas set against a polished, concrete floor and decorative tiles. Meagan Wells, 36, said she’s shooting for a look that blends industrial chic with mid-century modern.

A bank of 40 smart taps completes the interior space with room for some 150 guests. Additional seating will be available in a covered breezeway and a rear patio. Guests will be able to play cornhole and board games.

The Wellses plan to have live music on weekends and will host trivia events at least once a month. They want to maintain a family-friendly environment.

Set to open in coming weeks, Union Taproom joins a growing roster of new bars and eateries clustered along Central Avenue and other downtown thoroughfares. The Wellses think their enterprise is the first of its type in Polk County, though the concept has proven popular across the nation, especially with the millennial age group.

Business owners appreciate better keg yields with pour-your-own devices, which reduce the number of returned or incorrect orders, according to a March article in Business North Carolina magazine. The system also cuts losses due to excess foam, overpours, giveaways and free tastings.

Union Taproom will take advantage of multiple distributors so that its taps will flow with an ever-changing list of products reflecting the diverse universe of craft ales and lagers. There’s no kitchen, but customers are encouraged to grab take-out fare from local restaurants.

Meagan Wells, a mother of two, ages 10 and 4, gave up her job styling hair to concentrate on managing her new business. She’s excited about introducing customers to the world of beer, and educating palates.

Her taste in beer once was limited to Michelob Ultra, a light lager that she now finds ho-hum.

Having experimented with different styles of beer, “I found that I do like craft beer,” especially sour ales, she said. “It’s fun to try different kinds.”