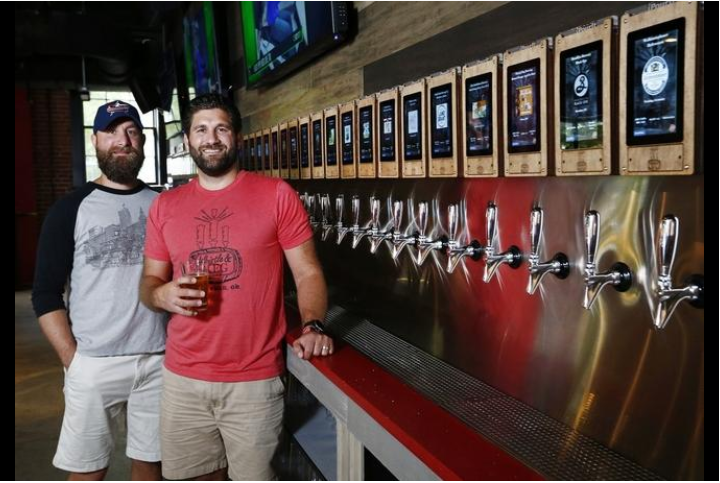 Whistle & Keg bar is central Ohio’s first self-serve bar. Customers get wrist bands that allow them to pour their own beer, wine, cider or other drinks from 50 taps. They are charged by the ounce.

*Originally published on The Columbus Dispatch by Jim Weiker

Central Ohio’s first self-serve bar opens Friday in the Arena District, allowing customers a chance to pour their own.

The Whistle & Keg, at 343 N. Front St., has no bar or bartenders. Instead, patrons present a credit card and driver’s license at the entrance to get a wrist band that activates 50 taps lined up on a wall. Each tap describes the beverage and the cost per ounce. Customers can pour as much as they want and are charged by the ounce. At the end of the night, they turn in their band and cash out.

This is the third Whistle & Keg, following the first one in Youngstown in 2017 and another that opened earlier this year in Cleveland. It joins a growing list of self-serve bars across the country but is the first in central Ohio, said Mike Thomas, who owns the franchise with his brother, Joe Thomas.

“We saw this in South Carolina and adapted it in Youngstown,” said Mike, who’s in Columbus this week for the bar’s soft opening before the official opening Friday. “We liked it as customers. Craft beer is so broad that this allows you to try beer without committing to a whole pint. There’s nothing worse than getting an $8 beer that you don’t like.”

Customers at the bar this week agreed.

“I don’t really like beer, but I like trying new things,” said Cincinnati resident Jessica Mills, who was in town for a concert. “It’s super fun to try.”

In addition to saving on bartender wages, self-serve bar operators save on keg waste, said Emily Maassen, marketing manager for iPourit, the California company that installed the tap system for Whistle & Keg and 180 other bars across the country.

“In a traditional bar, you lose 20 percent of keg yield from testers, the wrong beer, bad pours, free beers,” she said. “With this system, you’re getting a 98 percent keg yield. The only thing you’re losing is the end of the keg and cleaning the keg lines. That’s additional profit operators would otherwise lose.”

IPourit started installing the self-serve systems in 2012 and saw business leap the past two years as the concept took off, Maassen said.

“People like to try different types of craft beer. They don’t want to commit to an entire pint of something,” she said. “Also, millennials want instant gratification. They don’t want to wait in line. With this, as soon as they want it, they get it. … In addition, operators are just looking to differentiate themselves in a very crowded market. There are so many bars and restaurants in the country, everybody’s looking for something different.”

Maassen and Mike Thomas acknowledged that there are some challenges to the system.

While speaking with The Dispatch Wednesday evening, Thomas noted that a half-dozen customers walked into Whistle & Keg and turned around, presumably because they didn’t understand the system.

“There’s definitely a learning curve for this,” he said.

Another potential drawback for some customers: the inability to belly up to the bar to chew the fat with a server.

“A lot of people like a bartender, they like that conversation, they worry this technology takes away from that one-on-one personal interaction,” Maassen said. “We tell operators to employ ‘beer tenders’ who can explain how to use the beer wall and talk about the beer, to get that interaction.”

Maassen and Thomas also hope technology will eliminate another potential challenge: a bottleneck at the check-in and checkout stations. They hope to install a self-checkout system that will allow customers to simply drop off their wrist bands as they leave instead of formally checking out.

Technology has addressed another potential problem: overdoing it. Since there is no bartender to tell a customer they’ve had enough, the system automatically cuts customers off after 96 ounces of beer (or the wine, mead or cider equivalent). At that point, customers must get approval for more.